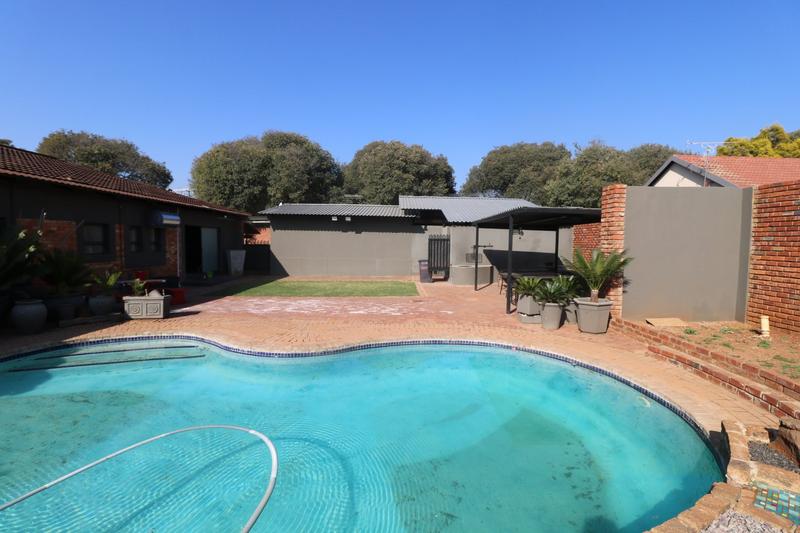 This elegant and attractive property is in the heart of Daspoort, so in close proximity to all amenities. Dual Mandate for Duvenhage Properties and Marikas.

This beautiful house was built on a plot that is just over 1100 m2 in size. This house is approximately 260 m2 in size. It consists of a lounge, dining room, office area. Nice modern open plan kitchen with its own scullery area. The whole area is neatly bred out with nice modern lights. Then there are those 3 bedrooms, each with its own bathroom. The master bedroom has nice large walk in closets.

Outside the main there is a complete apartment of about 104 m2. It consists of a 1 bedroom, 1 bathroom with its own kitchen and lounge. The apartment has its Pre-paid water and power as well as its own entrance to the premises. With its own separate braai area.

For your leisure the property offers a few special features such as a pool, large entertainment area of approximately 24 m² with a built in bar and built in braai.

Security wise the property is equipped with security on the windows and doors. Further it is surrounded by high walls and security gates. The driveway access gate and garage door are motorised.

In order for you to purchase this lovely property, your income before deductions must be R 36 500 or more. This is at an interest rate of 8%. It can be a combined income. This combined income does not have to be husband and wife. You can buy with a friend or a work colleague together. We prefer to pre-qualify our clients then neither you nor we get a surprise when we apply for the bond on the property.

The area was discovered in 1836 by Andries Pretorius and named after the Rock Hyrax. In 1848 a group of Free State farmers moved to the Magaliesberg, Transvaal. The 2 farms Elandspoort and Daspoort are farms they started on next to the Apies River. 1841 is the ground measured from the farm Daspoort.

Pretoria Portland Cement, also known as PPC, is a company that manufactures cement and is situated on the farm Daspoort. The company was founded in 1888.

1905, Daspoort Estate and Daspoort proclaimed respectively. Hermanstad was once part of the farm Daspoort and were measured in 1897 and proclaimed in 1898.

1893 Jure Sinovich rented a farm out of the farm Daspoort port along the Apies River and start a vegetable farm on the 3km strip. Today known as the Sinovich group.

In 1927 the father and son partners purchase a portion of Daspoort 319 JR comprising approximately 50ha which is mostly marsh land. The marshland is drained and becomes home and life headquarters to George who leaves the Poort farm.

Over his life time George Anton Sinovich, who was well-known for his generosity and hospitality, created a family legacy having been extremely involved in both community and Catholic Church affairs? Because of his involvement in and dedication to community affairs he was a Hercules municipality councillor by age 21 and Mayor by 28. His business activities could be called ‘too far-sighted’ as two business ventures entered had George became one of the biggest government contractors in supplying vegetables during the Second World War, and supplied this produce to many large mining companies too trading under the name G. Sinovich and Sons. In time he built a fruit and vegetable canning factory; bought a winery prior to beginning a chain of bottle stores in the Cape; and purchased numerous properties in the Pretoria area.
In 1959 the property business was established. The Sale of erven, which was done under repayment instalment agreements over a seven year period, commences. Purchase price at the time was £400 for 10 000 square feet (R800 for 929m2). The first houses are built the same year and as Sinoville was located in a peri urban area, the Sinovich family purchased water from Pretoria and sold it to residents. The township founders were also responsible for refuse collection, road maintenance and all services.
The area is between north and south connected with Ollie Deneyschen Tunnel, or called Daspoort tunnel. It connects Danville and Claremont.